While Mitt Romney did a good job fending off the tag team efforts of President Obama and his support moderator Candy Crowley in last week’s debate, he missed opportunities to hit the “home run,” as he did in the first debate. It was apparent that Ms. Crowley was prepared to support the President as evidenced during the exchange concerning the tragic events in Libya.

Despite the apparent setup, Romney held his ground. Although Debate #2 has been declared a draw, Romney could have destroyed his opponent if his approach had been similar to that utilized during his subsequent speech at the Alfred E. Smith Memorial Foundation Dinner (see Romney Addresses 67th Annual Alfred E. Smith Memorial Foundation Dinner). He was masterful with a down to earth, common sense approach intertwined with respectful humor with which the everyday American could identify. Think about how he could have destroyed the President in the second debate if had utilized the same approach on the following exchanges during the debate:

1.)   Gas at $ 1.86/Gallon. Obama commented that it occurred because the economy was entering a recession. Romney had the perfect opportunity to reply: “Mr. President, with all due respect, most high school seniors understand the concept of supply and demand and its effects on prices. We just finished discussing the fact that the domestic oil supply is down due to the current Administration’s policies of restricting drilling domestically, which has resulted in current high prices at the gas pump. 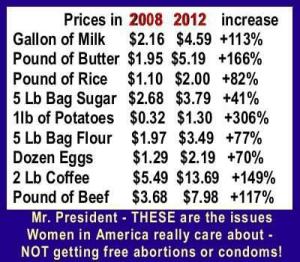 2.)    Obama commenting on Romney’s proposed $ 5 trillion tax reduction. Romney did a nice job of rebutting this, but could have put the frosting on the cake: “My plan allows businesses to grow and expand the economy, which will create more jobs, reduce unemployment and increase tax revenues– a concept I understand from operating in the private sector and growing a business.

3.)    Obama’s claim that Romney supported outsourcing jobs overseas. It would have been an appropriate response for Mr. Romeny to have stated: “Mr. President, actions speak louder than words, and your actions have supported the very outsourcing you condemn. I believe one of your top advisers, Mr. Immelt from G.E., has outsourced jobs to China. I do not plan to play favorites.”

4.)    The Auto Bailout and Obama’s claim that Romney’s solution would have cost millions of jobs. “Mr. President, as an attorney, you should understand better than most, that a reorganization bankruptcy would have achieved the same results without loss of additional jobs. Additionally, it would not have favored union pensions over those of non-union employees, many of whom ultimately lost their pensions. Nor would it have favored unions over bondholders. Every individual would have been treated equally.

5.)    The Libya attack. Instead of debating whether it was a terrorist attack or a video that instigated the attack Mr. Romney could simply have stated: “Mr. President, instead of playing golf and flying to Las Vegas to for a fund raiser I would have been at the White House doing my job protecting American lives!”

Having withstood the withering attacks by the SEIU during its Corporate Campaigns against EMS, I have found these types of responses — made professionally and respectfully – worked to take the steam out of opponents’ sails, and to diminish the respect for the SEIU in the eyes of employees and customers! Even with supporters like Candy Crowley, Mr. Romney could have hit it out of the park if he made the aforementioned counters with the same approach and congeniality he displayed at the Alfred E. Smith dinner. The SEIU had similar support from Jobs with Justice and The Interfaith Workers Justice Group, as chronicled in The Devil at Our Doorstep, and we successfully used these types of responses presented in a professional way to expose its opponent’s true colors. EMS won its battle against the SEIU.  Romney needs to stay on the offensive Monday night utilizing the same demeanor and congeniality he displayed at the Alfred E. Smith dinner and expose his opponent’s lack of credentials to remain President of these United States! It is time to reverse The Decline of American Exceptionalism!

One response to “The Last Debate”