It has been five weeks since President Obama was re-elected. During this time period many theories have been espoused and articles written as to why Romney lost, despite the fact he was arguably the more qualified candidate. Many believe that the The Real Reason We Lost was because Whites Stayed Home And Re-Elected Obama because of Romney’s Mormon religion. Others including nations like Russia believe Obama Was Re-Elected by “Illiterate Society”!

Wisdom from the Bar

Luke ”The Drifter” says: “We Americans got so tired of being thought of as dumbasses by the rest of the world that we went to the polls this November and removed all doubt.”

Yet others believe that Church Failure Led to Obama Re-Election  because churches are afraid of loosing their tax exempt status. 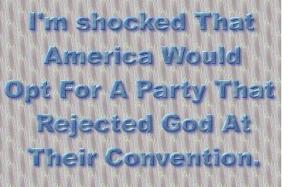 Still others believe that Romney was a deeply flawed candidate (see The Only Thing You Need to Read Today about the Election) and that a Divided GOP Resulted in Obama Victory. There were those who predicted a Romney victory based on outdated statistical measures that did not take into account Barack Obama’s Persuasion Army  and the fact Obama attacked Romney early and often in order to put Romney on the defensive (see  Obama Attacks Romney Early to Define Rival). Finally, there are many who believe massive voter fraud occurred, which ultimately guaranteed the president re-election (see Paul Hollrah’s Have We Waited Too Long?, calling for Congressional investigation).

Although each of these arguments may have contributed to Romney’s defeat, there are three fundamental reasons for the loss which have been largely overlooked.

First, the Romney camp was steamrolled by Big Labor’s Election Intimidation Factor, namely, a Corporate Campaign! The Bottom line is that big labor and its far left activist buddies utilized the Persuasion of Power  to manipulate the electorate with its ground game and foot soldiers in order to provide Obama the slim margin needed to be re-elected. The Obama campaign and big labor utilized the same Death by a Thousand Cuts tactics against Romney and the GOP that big labor utilizes against business to force through recognition agreements, and is attempting to use to put  Card Check into place, as chronicled in The Devil at Our Doorstep.

Second, the fact that the Romney campaign and the GOP Resists Calls to Retool Message,
and embrace a big tent philosophy that includes all people, was and continues to be a crippling conservative fault! This is especially true when the big labor foot soldiers were on the ground registering people to vote and getting them to the polls as discussed in Big Labor’s Expense for Election Foot Soldiers, Finally in Media Spotlight!

Third, Romney tried to win a personality contest he did not have the charisma to win! This was particularly evident when the president ran an attack campaign, which was aided and abetted by the mainstream media, designed to keep Romney on the defensive.

All three of these tactics are part of the Alinsky-styled “Death by a Thousand Cuts” discussed in The Devil at Our Doorstep.  Use of such tactics is designed to recruit the naïve and the easily intimidated to join the cause, to include people under the guise of “social justice” in order to inflict class warfare and to use personal attacks along with dissemination of misinformation and propaganda to intimidate and embarrass the target.

Romney and his campaign advisors never understood during the election campaign, and to date the GOP has yet to grasp, the effectiveness of the Death by a Thousand Cuts campaign. The personal attacks and the dissemination of misinformation and propaganda is now being utilized by the President to win the ‘fiscal cliff” battle as  witnessed by the story the Obama Campaign, Yes You Read that Right, Launches Capitol Call Program Against Republicans in Fiscal Standoff. While the GOP is bungling the ‘fiscal cliff” negotiations with Obama, he and his supporters are utilizing misinformation and propaganda on a massive scale to paint the GOP as villains, regardless of the outcome.  Not only the President himself, but his press secretary, other democrats, and big labor and far left activists, are bombarding the American public to convince Americans that regardless of the results of the fiscal cliff negotiations the GOP is at fault no matter what happens. This is witnessed by the following e-mail sent out December 10, 2012 by the Obama campaign.

Who will decide if your taxes increase in just 22 days? A few dozen members of the House of Representatives, that’s who.

Cutting taxes for the middle class shouldn’t be difficult, especially when Republicans claim they agree with the President on the issue. But some Republicans are still holding middle-class tax cuts hostage simply because they want to cut taxes for millionaires and billionaires.

Here’s what’s going on right now: President Obama is asking Congress to move forward on a plan that would prevent 98 percent of American families from paying higher taxes next year. The Senate has passed that bill, and the President is ready to sign it — but the Republican leadership in the House of Representatives won’t even bring the bill to the floor for a vote. House Democrats have filed a petition that would force a vote if it attracts 218 signatures.

If a bill has enough votes to pass, Congress should vote on it and pass it. It’s a pretty simple proposition. And every Member of Congress who hasn’t signed on to keep taxes low for the middle class needs to hear from you.

Use the call tool today to reach out to fellow Obama supporters and make sure they contact their Republican representative.

Let’s get one thing straight: If your taxes go up, Republicans will have made a conscious choice to let that happen. They’ll have missed the opportunity to prevent it, just to cut taxes for the wealthy.

Republicans need to stop using the middle class as a bargaining chip. If they fail to act, a typical middle-class family of four will see a $2,200 tax hike starting in a few short weeks. Middle-class families could face some tough financial decisions simply because Republicans didn’t want to ask the wealthiest 2 percent of Americans to pay their fair share.

We know we can affect change in Washington when we raise our voices together. So pick up the phone and make a few calls. Republicans in the House need to hear from their constituents. You can help:

P.S. — Look up your representative in Congress here, then call the switchboard at 202-224-3121 and make sure your voice is heard in this debate, too.

Obama tweeted today that “maintaining long term unemployment benefits adds 400,000 jobs to the economy” in response to Republican push back. This is economically ludicrous yet there has been virtually no response from the GOP! Similarly what did Romney do during the election campaign when Obama attached his Bain Capital record? Absolutely Nothing! As I learned during the SEIU’s campaign against EMS, you cannot stand idly by and allow the opponent to continue to disparage you and your position. You have to take the offensive and put them on the defensive! When EMS adopted this approach it turned the tables on the SEIU and eventually won!

The current GOP mistake is to believe being nice and appealing to its base will carry the day. Romney and his campaign would not listen to people who had endured this type of campaign and go on the offensive, appeal to all Americans, expose the Obama misinformation/ propaganda, expose Obama’s past, and initiate an effective electronic and media ground game to discredit the president and his policies and agenda. Despite the fact the president provided many opportunities for Romney and the GOP to expose his rhetoric. (i.e. the reduction of domestic oil exploration permits and subsequent high gases prices) they remained silent instead of educating the electorate!

Romney came out strong in the first debate, as chronicled in Has the “Puppet” Lost the Fire in the Belly. However, it was apparent that the Obama machine was intent on resuming its Death by a Thousand Cuts  as seen in the ensuing vice presidential debate, when Biden the Bully came out swinging. The Romney Campaign subsequently maintained a defensive nice guy posture instead of going on the offensive, as recommended in The Last Debate .  Conversely, the Obama campaign ramped up its misinformation, propaganda and ground games and stole the Election!

Romney and most of the GOP hierarchy still don’t understand that without a credible and opposite alternative, a large percentage of Americans are naïve enough to believe the Obama rhetoric! When EMS provided a realistic alternative people understood and EMS won! Does the GOP not believe that Obama is intent on destroying them and the great American free market system? If the GOP is that naive, they simply need to watch Obama and the SEIU, Sittin’ in a Tree and wake up to the reality this president has been trained in these tactics by his big labor Gasping Dinosaurs and is intent on accomplishing his mission!

It was verified Monday when Obama showed up in Michigan to support his big labor buddies (see Michigan Madness – Thousands Plan to Siege on State Capitol on Tuesday Over RTW Bill) effort to prevent Michigan from becoming the 24th Right to Work State. The President spewed misinformation that Right To Work (RTW) prevented collective bargaining and was really the right to work for less with no response from the GOP! It is obvious Obama and the Big Labor Bosses Demonstrate Why RTW is Necessary – Shame on Them and shame on the GOP for not going on the offensive to prevent The Taking of American Freedoms!