The Taking of American Freedoms

Recent events, both at home and abroad, show the growing trend of misinformation, intimidation, violence and coercion utilized by those determined to force their will upon the majority of Americans while stripping them of their most basic freedoms under the constitution. These tactics are being embraced by our current President and his campaign to obtain his re-election. They are, in fact, tactics the President himself learned from Big Labor’s Gasping Dinosaurs, and which he has, ironically, condoned when he sits back and votes “present” as Americans at home and abroad are persecuted and attacked by those who cannot survive in a free market society without the use of force. These tactics have been chronicled in The Devil at Our Doorstep : The Taking of American Freedoms.

The Devil at Our Doorstep is believed by many to be a story solely about labor unions. In reality, it is an expose and an indictment of how a segment of the American population (and by extension, the world population) believe they have the inherent right to utilize any means necessary to achieve their goals, even if it is at the expense of other peoples’ rights and freedoms. It’s an indictment of the political process utilized by the far left in America and radical groups around the world to achieve the ultimate goal of socialism and a “one world order.” A goal the current President of the United States not only agrees with, but is determined to achieve!

National and international events, of both the past few weeks and throughout the tenure of this Administration, are consistent with the tactics and objectives utilized by aggressive labor unions, as outlined in The Devil at Our Doorstep. In my mind, there is no coincidence here. In order to share my conclusion on recent happenings, we must review some events/tactics that are well known and widely reported in the media, as well as some to which the media has turned a blind eye.

Internationally, the tragic deaths of Americans in the Middle East and the continued assault on Americans and American Embassies have been major headlines this week, and rightfully so. Speculation has run rampant on the reason for the attacks carried out on the 9/11 anniversary. Much of the speculation has pointed to the production of an anti-Islam YouTube video by an obscure artist. Many questions have been asked about why the Embassies were not prepared and the military was not on high alert to the tepid response by the Administration to the crisis. What has not been addressed is the philosophy of this President and his underlying agenda. Whether he is Muslim or not, as many speculate, is irrelevant. What is relevant is his socialistic philosophy, which is sympathetic to such causes and embraces the tactics necessary to achieve its agenda whatever the cost! In this case, the loss is American lives, yet the President’s action has been negligible, as he reverts to his well known stance of “voting present.”

At home, the Chicago teachers strike has continued to dominate headlines, while the President again sits by and “votes present.” Obviously, he is in agreement with the union and it’s Persuasion of Power. However, the strike also diverts attention from the upcoming election and the President’s failed policies. Look for more of these type scenarios to occur between now and Election Day! They are text book Corporate Campaign diversion tactics designed and utilized by Big Labor to take peoples’ eyes off the ball while achieving its agenda through coercion! One would think the mainstream media would be all over the reasoning and timing of the current strike; however, it seems content to provide the President, his campaign and Big Labor the diversion desired because it is sympathetic to Big Labor and the President’s socialistic agenda.

Other occurrences have been completely ignored by the mainstream media! One involves fallout from the General Motors bailout, which in reality was no more than a government takeover of business and a bailout for the U.A.W.! Barely covered in the mainstream media was the fact that non-union employees at Delphi were forced to sacrifice their retirement programs while the U.A.W. members’ programs were kept intact (see Delphi Salaried Employees, Tim Geithner Pressured Delphi to Cut 20k Worker Pensions Shows Obama is in Bed with Unions, and Non-Union Delphi Retirees Slam Obama Over Pension Cuts). Evidently, the White House and Treasury Department overstepped their bounds and unilaterally decided who would receive pensions! Yet again this Administration uses political tactics, as explored in The Devil at Our Doorstep,  to forcefully take from one to give to another were at work. Simply put, the philosophy of Control Business, Control the Country was at play! Talk about tyranny and “The Taking of American Freedoms!” Where was the media in all of this, and why weren’t they exposing this travesty? Why are some people being given a free pass to trample upon the rights of others to achieve their objectives?

The media bias has also been seen locally. Despite a news release having been circulated to the press throughout the state of Indiana, it appears that only an Anderson, Indiana newspaper has reported about the destruction of an anti-union sign. Apparently, local union sympathizers did not like the sign that a member of the “Associated Building Contractors” had on its trailer, which read “78% of Hoosier Construction Workers Choose NOT to be Union.” The trailer was parked on private property facing Interstate 69, close to Anderson, Indiana. Evidently, the sign was so offending to union sympathizers that they fire bombed the company’s trailer! (See ABC Trailer Arson 09-11-12 and Trailer 2012)

The union sympathizers found the contractor’s sign objectionable, but still rationalized that it is ok for them to march through the streets of major cities with their patented “Shame On” signs and become indignant when people challenge them. Typical disingenuous and hypocritical “do as I say not as I do” union mentality! 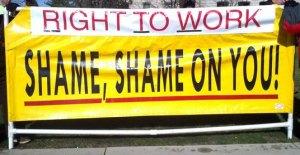 What has happened to modern civilized society in America? We can rationalize such events in underdeveloped, less civilized societies, but certainly not in the United States. Where is the outrage? Where is the mainstream media? Why aren’t media outlets reporting on this destruction of personal property located on private land? Why aren’t they calling for an investigation into these obvious tactics of intimidation and coercion? Why isn’t this a national news story? Why doesn’t the President know about and condemn such blatant disregard to the right for American freedom of speech and protection of American and personal property?

Perhaps because the mainstream is so invested in this Administration’s divisive policies to destroy the free market system for the sake of so called “social justice.” It could also be explained as a lack of investigative prowess in today’s media, or a fear of reprisal from the far left. Whatever the reason, the mainstream media better wake up before this Administration along with its national and international allies fulfill their mission, “The Taking of American Freedoms.” What the mainstream media seems to overlook is that the freedom of the press could be next!

Vetting Obama’s Political Tactics is important. It is critical that the Romney realize the political reality of Obama’s  Corporate Campaign tactics as described in the SEIU’s Contract Campaign Manual. Obama’s Death by a Thousand Cuts campaign will continue unless the Romney campaign recognizes the Lessons from the Wisconsin Recall and that they must punch the bully in the nose and expose him for what he really is!

It is just as important for Americans across the country to realize that if the President is re-elected, “The Taking of American Freedoms” will become the major priority as he strives to complete his socialistic/tyrannical objectives! America, We are at War! Armageddon is at Hand! Please Wake up and vote “No” to Obama and his cronies in November! Remember that in a speech the President made right after his election in 2008 he commented he was going to fundamentally transform America. He is well on his way and The Devil at Our Doorstep lays out the blueprint!

13 responses to “The Taking of American Freedoms”