Over the past six months, and throughout the remainder of his term, President Obama will continue his agenda to Divide and Conquer the American people (see Obama NLRB pushes pro-labor agenda as administration winds down). One of his major weapons will be imposed by Card Check, which will allow his “buddies,” the big labor bosses, to force unionize businesses of all sizes across the country (see Card Check through Regulation vs. Legislation and Rogue NLRB). The net result will be major dollars through union dues being channeled to the President and his far left progressive supporters to gain political control of our country and fundamentally convert it to a socialistic/totalitarian regime (see It’s All About the Dues Money).

Three recent NLRB rulings have been highly favorable to labor and with a Pro-Union Proposed Bill by the far left, combined with recent introduction of reduced election time periods — as chronicled in the recent blog  Breaking News: The Ambush is Upon Us – it has placed President Obama and the union bosses in a position to Control Business, Control the Country! There is no doubt Card Check is one of the main objectives, and it is A Death Penalty for Employees and Employers. The intent of establishing Card Check  and other objectives of this President in his remaining 15 months was predicted in the prior blog (below), and shows his O-Cloward-Piven Strategy Is Working!

Unions Demand Payback: Card Check is back on the Table!

Last Tuesday’s re-election of President Barak Obama will allow him to continue his Rule by Fiat and to push his socialistic agenda. This, in turn, will rejuvenate Big Labor’s most coveted objective, “Card Check.” The President will continue his drive to circumvent Congress through the use of Executive Orders and regulatory actions, with a goal of destroying the free enterprise system and replacing it with a socialistic society. In fact, as mentioned in the blog “Biden the Bully,” don’t be surprised by an attempt to use Rule by Fiat to eliminate presidential term limits and secret ballot political elections to effectively establish a totalitarian government. 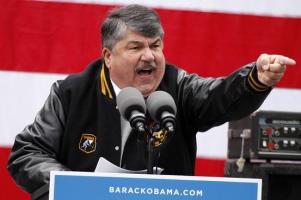 President Obama learned the tactic of controlling the populace though his buddies — Big Labor’s Gasping Dinosaurs — who began applying pressure on the President  the day before the election when it was proclaimed by AFL-CIO Big Labor Boss Trumpka said “You’ll See Card Check Within the Next Obama Term.” Card Check, which originated as a piece of favorable sounding legislation called the “Employee Free Choice Act” [a.k.a. EFCA], was never enacted through Congress. Despite its misleading title, EFCA had as its basic tenant the elimination of the secret ballot election as a means of allowing employees to determine if they want to be represented by a union.  Since that time, the President has attempted to enact EFCA Through the Backdoor in order to pay back his buddies for their support in the 2008 and 2012 Presidential Elections. The President’s method of choice, much like he has done with the Environmental Protection Agency and the Department of Labor, is to achieve Card Check through Regulation vs. Legislation!  By this means, he can avoid having to receive Congressional authority altogether.

Make no mistake, the President clearly understands the philosophy Control Business, Control the Country! He understands Card Check is A Death Penalty for Employees and Employers,  and also that it is a means of  cementing the  support of the Gasping Dinosaurs. In fact, immediately after the election it was reported, but not widely publicized by the fawning mainstream media, the TSA Grabs Union Contract. This, along with Trumpka’s declaration about the reelection of President Obama, spells doom for American business and the America economy.

Along with increased E.P.A regulations (see attached Obama-EPA Plans for 2013), increased banking regulations and other regulatory controls,  Card Check, which uses the Persuasion of Power  to indoctrinate and force employees and employers to capitulate (as chronicled in The Devil at Our Doorstep), portends a financial meltdown that could result in the destruction of the American economy as espoused by Cloward and Piven as a means of collapsing the government (see Overwhelming the System). Interestingly enough, the cornerstone of Cloward and Pivens’ plan was “Universal Healthcare,” which now most likely will come to fruition with Obama’s re-election. Already we are seeing tremendous drops in the stock market and employers’ warnings of impending layoffs and/or reduction of employees to part time to pay for or avoid the cost of Obamacare (see Good Morning America, Here’s Those Layoffs you voted for Last Night).

Evidence of Big Labor’s renewed confidence was on display just this week as Labor Leaders Heading to the White House to put on a full court press promoting tax hikes for wealthy Americans, and rallying to keep a strong “safety net” intact for low income families, opposing any cuts to Medicare, Medicaid, Social Security benefits or shifting costs to the states, no matter the impact on the imminent fiscal cliff. Big Labor will also pressure the White House on other heated issues, primarily hiring teachers and getting the government to focus on “internal job growth,” which equates to spending on infrastructure projects, building roads and bridges.

Imagine the long-term consequences on unemployment numbers and the overall economy! If people use common sense and are honest with themselves, they will realize this is the exact result the President and his Gasping Dinosaurs desire. It is much easier to control people when they are all the same and beholding to the hand that feeds them! It is time for all Americans to wake up and realize The Taking of American Freedoms is this Administration’s and its supporters’ ultimate goal! Be Afraid. Be Very Afraid  America, We are at War! Armageddon is at Hand! Please Wake up!

The question all Americans need to ask and address is Do Labor Unions Carry Too Much Political Clout? The unequivocal answer is “Yes.” Unions provide the provide the financial support, foot soldiers and ground support needed by this and administration and its far left supporters like Soros and media Matters to fundamentally transform this country and provide them control. Americans need to wake up and demand that Congress Pass a Bill to Protect Employees from Unions! Please contact your local Representatives and demand such a bill be passed to protect employees, employers and the future of this great country! The book  The Devil at Our Doorstep succinctly Illustrates what will happen to this country if we allow the bullies to Take American Freedoms by Card Check through Regulation vs. Legislation!