The U. S. Supreme Court has agreed to hear two cases in the next year which will determine whether persons will be protected in their exercise of the fundamental right to either choose whether to engage in union representation or to abstain from such representation, and to make such decision absent intimidation from either the union or their employer via the secret ballot election — the same process we use to elect our local, state and federal government officials. Interestingly, both cases stem from the President’s attempt to provide political payback to his allies in Big Labor through the Rogue NLRB.

In the first case, the U.S. Supreme Court will decide if the President acted unconstitutionally when he made several recess appointments to the agency charged with oversight of labor-management disputes, the National Labor Relations Board. The lower courts,  U.S. District Court of Appeals for the District of , and the U.S. Third Court of Appeals both found the appointments unconstitutional (see Supreme Court to Consider Obama Recess Appointments and Appeals Court Nixed Obama’s Recess Appointments). This case not only has important implications concerning the further shredding of our constitution  by the Obama Administration, but also Obama’s lawlessness in bypassing other branches of our government, and ignoring the tenant of the separation of powers of the branches of government, to further his own socialistic goals by appointing his own radical people without review and agreement by the legislative branch. In the case of the NLRB, his appointees’ seek to reach the Administration’s objective of achieving Card Check through Regulation vs. Legislation! Simply put, the goal is to eliminate employees rights to a secret ballot election and replace it with Card Check as the means for employees to determine if they wish union representation. If you listened to the Administration’s and Big Labor’s rhetoric, what could be more simple and fair? Unfortunately, it is a process of coercion and intimidation as chronicled in The Devil at Our Doorstep. A process aptly named Death by a Thousand Cuts, which forces employers and employees to capitulate and be subjected to the terms of the so called Neutrality Agreement through ruthless Corporate Campaigns! An agreement that is hardly neutral and subjects both the employees and the employer to Big Labor’s Persuasion of Power! 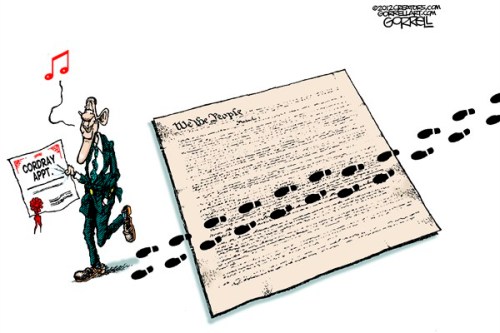 The first case, however, is just the Tip of the Iceberg. The other involves a question of the validity of Big Labor’s sacred cow, the aforementioned Neutrality Agreement (see BNA – Supreme Court Agrees to Review LMRA Case Invovling Section 302, Neutrality Agreement). To appreciate this case and its relevance, one must understand why this agreement is so important to the Big Labor Gasping Dinosaurs. As documented in previous blogs, unions have been on a steady decline since 1947 when Congress, following more than a decade of union corruption, passed the Taft-Hartley Act. Of the many important provisions of the Act, perhaps none was more so than the guarantee of the secret ballot election which, for all intents and purposes, eliminated Card Check!  Since its peak prior to passage of the Taft-Hartley Act, union membership has dropped from approximately 35-40% of the workforce to a low of 11.3% today. Statistics gathered by the federal Bureau of Labor Statistics, included a drop of approximately 400,000 members in the last year alone. Big Labor, realizing its imminent demise, understands it must reinstate Card Check to survive and is relying on the President and his Rogue NLRB to allow them to exploit a little known and hidden clause in the Taft-Hartley Act that allows unions and employers to mutually agree to representation through Card Check. Unfortunately, it is very rarely an agreement achieved through mutual consent. It is predominantly achieved by Big Labor through outright intimidation of employers and employees. What is interesting about this particular case is that it has been brought by an employee disgusted with the intimidation and the fact he believes his rights to a secret ballot election and protection of privacy have been violated! 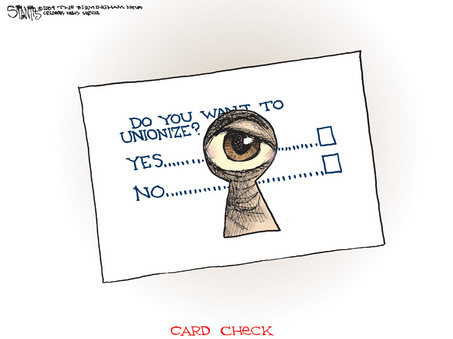 One thing certain about these cases is that the justices of the Supreme Court will receive a tremendous amount of pressure from the Administration and its Big Labor buddies to overturn the decisions of the lower courts. The Gasping Dinosaurs, already headed toward extinction, understand all to well that if these decisions are upheld it will be the end of Big Labor as we know it in this country (see If ruling goes Against Labor Union, Organizing Could Get Even Harder). Additionally, the President and his party know all to well they need Big Labor’s financial and ground support to continue to win elections, as well as increase their grip on and expand an already oversized government.

Even more frightening for the future of the United States is what could occur if these decisions are overturned. If they are, this President will feel empowered to continue to appoint radical people to high positions, not just in the NLRB, but all areas of government. He will work to implement regulations that will allow the use of coercion and intimidation by the government and its henchmen to erode our rights, move the country towards socialism and potentially perpetuate the President’s Rule by Fiat! If they can eliminate the secret ballot election for union recognition and trample on the constitution to appoint government officials how long will it be before they expand these programs to every corner of the government? Can you imagine no secret ballot elections to determine our government officials and instead all being appointed by the President?  These are landmark cases that, if overturned, could be the ultimate downfall of this great nation!

Filed under Devil At My Doorstep Book, The Devil at Our Doorstep