Debating in the Desert

Arizona Governor Jan Brewer was gracious enough to invite my wife and me to the nationally televised CNN Republican Presidential Debate this past Wednesday in Mesa, Arizona. The invitation included seats three rows from the stage, just right of center, as well as an invitation to the Governor’s reception afterwards where we met the Governor and her son Michael, as well as the infamous Sheriff Joe Arpaio and other elite members of the Arizona Republican party. 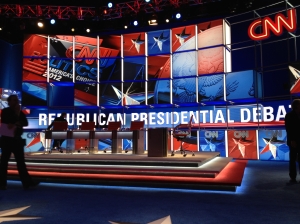 Labeling the attendance of such an event as “the opportunity of a lifetime” would be an understatement. The location of the seats provided an up close and personal view of candidates on the hot seat and some clues to their personalities and electability. Clues not easily picked up while watching previous debates on television. Additionally, crowd response and comments of nearby attendees, such as Roger Grad the Governor’s attorney, responsible for arranging the publication of her new book, “Scorpions for Breakfast,” and the Governor and I arranged to exchange signed copies of each other’s new books, as my new book The Devil at Our Doorstep will be released soon. These factors provided fascinating insight to each of the candidates. With the stage set, I want to provide you with a bird’s eye view of each candidate’s performance and their ultimate electability, as observed from the 3rd row.

Ron Paul: Having met a serious and rigid Ron Paul a couple of years ago at National Right-to-Work’s annual convention in Chicago it was refreshing to see the humor and relaxed body language of Paul on stage. Almost too relaxed as his socks were sagging and you could see his bare legs under the table, which drew comments from surrounding spectators as not very “Presidential.” Paul obviously did not receive as much face time as Romney and Santorum, so it was interesting to watch his hand motions towards moderator John King in an attempt to obtain more time, again humorous, but not “Presidential.” Although Paul’s domestic positions were favorable with the audience, it was apparent he hit a wall with his rigid isolationism stance and apparent naiveté of Iran and its quest for nuclear weapons. All in all, it was apparent that Paul has the United States’ best interest at heart and probably has some of the best domestic solutions, however, his rigid “take no prisoners” approach and foreign policy leaves him at the back of the pack. Despite his great ability to persevere, Paul should drop out now and instead of running as a third party candidate, which would split the Republican vote, endorse one of the other candidates. This would provide him with the option to become a potential Vice-President candidate. His base of young Americans would be very influential for the Republican Presidential candidate in the November Election.

Newt Gingrich: Many of us in the audience felt Newt was posturing himself for a Vice President position. The fact that his one word description of himself as “cheerful” and his obvious relaxed body language on stage hinted that he has resigned to a potential second position. Supporting such hypothesis was not just Gingrich’s lack of attacks on his opponents, but often his support of both Romney and Santorum when they were attacked for past positions or decisions. Clearly Gingrich was the smartest man on the stage and has the most experience, however, his moody moments and slouching style made him appear less than Presidential. As past debates have shown, he is a commanding debater and it was a shame he was not more tenacious Wednesday night. His usual sharp-witted presence only makes his opponents better and prepares the eventual nominee for the war to come.

Rick Santorum: Santorum was relaxed, prepared and knowledgeable. He presented a conservative position that set well with the audience. However, as George Will pointed out in his article Two Miscast Candidates, Santorum delved too deeply into some of the social issues, which elicited some negative reactions from the audience. Instead of sticking to issues such as reviving the economy, job creation and energy independence, he went off on long-winded tangents that left people in the audience in the dark. Despite the fact Santorum looked “Presidential,” his lack of experience became evident in his haste to attack Romney. In at least two exchanges he attempted to talk over Romney to gain the upper hand, which only made him appear rude, immature and less than Presidential. It was obvious that the crowd was disenchanted by these mistakes. Although Santorum has many credible domestic solutions and he is more realistic with respect to foreign affairs, it is imperative that he becomes a more polished debater if he is to win the nomination. His charisma alone cannot carry him to the nomination.

Mitt Romney: Romney is a successful businessman and politician, and throughout the debate he was polished and unperturbed. It was evident that Romney was relaxed, comfortable, prepared and hit the mark with his conservative talking points. He was strong on his positions with respect to domestic and foreign policy and clear in his objectives. He did not allow Santorum’s rude attacks to unnerve him or stray off message. One concerning problem for Romney is that he continually works from notes and does not ad lib well, which is a hallmark of Gingrich and a necessity to defeat Obama in the 2012 Presidential debates. At this point, Romney appears the likely nominee, as he has the stature, experience, business acumen and the money necessary to defeat Obama in November. However, if he is to win the nomination, and ultimately the Presidency, he must overcome an apparent lack of charisma and ability to identify with everyday Americans. Unlike Gingrich and Santorum, who both worked the crowd by walking to the edge of the stage during breaks to meet and greet, Romney remained distant. This is a fault he must overcome. 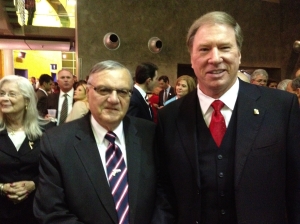 It seemed that the prevailing sentiment among attendees was that each of the candidates lacked that special something. If only you could combine Paul’s perseverance, Gingrich’s nimble wit and debating skills, Santorum’s charisma and Romney’s composure, Presidential stature and business acumen and experience, we would have a perfect candidate who could defeat Obama in November.  Many attendees also noted that the raucous attacks by the candidates towards each other are detrimental to the Republican primary and its chances to produce a candidate that can win in the fall. However, I feel that this is all going to prepare them for the long road ahead. As we know from the last election, President Obama will conduct a scorched earth campaign and it is imperative that the Republican nominee be prepared to weather the fire. I have experienced Big Labor’s Corporate Campaigns  and subsequently have a unique perspective on  what the Republican nominee will face from a President trained in the Persuasion of Power. Based on Wednesday’s debate, Romney appears best prepared to do so, however, he must improve his abilities as an adlib debater and he must rapidly learn to identify with the average American voters.

The evening would not have been complete without the opportunity to meet with the distinguished Governor of Arizona. We were able to briefly discuss the debate, as well as her infamous meeting with the President when he deplaned in Mesa a couple of weeks ago. Although I did not obtain any additional insight on what was discussed between the two when she was photographed pointing her finger at the President, it was apparent to me during our short meeting she has the toughness, charisma, experience and conservative ideas to make a great Presidential candidate. We must be leery, because if the Republican nominee does not demonstrate her intestinal fortitude in the upcoming Presidential Election, we will once again be forced to face The Devil at Our Doorstep. 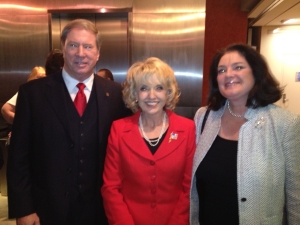 3 responses to “Debating in the Desert”